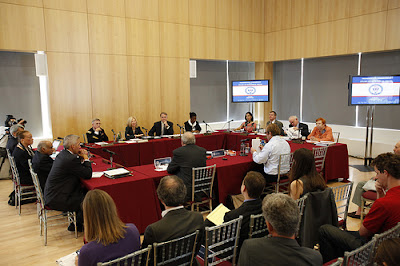 One of the stated purposes of a handpicked panel known as the Bioethics Commission is to apologize for past abuses committed by the U.S. government, some of which included the noted Tuskegee syphilis experiment, various unwarranted radiation tests and unwitting Guatemalan subjects infected with sexually transmitted diseases.
Secretary of State Hillary Clinton called the Guatemalan STD case “clearly unethical.” “I beg you, please help us,” said citizen Lisa Becker on March 1, when Obama’s Bioethics Commission met in Washington, D.C. Her gripping words were directed to Amy Gutmann, the head of this panel that is ostensibly concerned with past abuses even as present-day abuses are tossed in a padded room, so to speak.
The dark annals of history also chronicle covert CIA agents giving unsuspecting “johns” hallucinogenic drugs, and Dr. Ewen Cameron’s barbaric sleep-room experiments in Canadian mental hospitals. However, the Bioethics Commission faced an unexpected moment during its public comment session March 1 when 20 speakers delivered a powerfully distinct message: Non-consensual human experiments are still being conducted on thousands of Americans to this very day, and they want these abuses to stop.
On April 20, thisAFP writer participated in a conference call with many of the individuals who appeared in Washington before the commission. One woman, 36-year-old Tammy Battaglia, described the process of brainmapping and said she had been taken to a laboratory at CIA headquarters in Langley. Ms. Battaglia and others stressed that this type of abuse can even negatively affect other family members. She told the commission, “I have not consented to be experimented on by any branch of the government, military or members of the American Medical Association.
Nobody should have the right to maim or torture any other person or to treat them in the cruel manner that I have been treated under the guise of national security.” Ken Rhoades sent a videotape of the open microphone testimony to this writer, and what unfolded on March 1 was riveting. Texas doctor John Hall spoke of an alarming rate of complaints associated with the use of radiation weapons that are debilitating victims. Author Allen Hornblum, who has written on the use of prison inmates and children as test subjects, emphasized, “Medical ethics is an orphan in today’s medical arena.” Others that day reported burns on their bodies from torture, RFID tracking chips, the Navy’s Project Medusa microwave weaponry, the implantation of false memories and additional forms of psychological torture. During our conference call, John Peter Rosenholm delved into the subject of sub-vocal speech recognition before broaching the topic of a patented Army procedure that utilized “Voice-to-Skull Devices,” or V2K. The Army’s own website describes V2K as, “A neuro-electromagnetic device which uses microwave transmission of sound into the skull of persons by way of pulse-modulated microwave radiation.” Rosenholm also warned that the government “can falsely place someone in the hospital, then have a free ticket to do anything it wants.”
Another man known to AFP readers, former FBI agent Ted Gunderson, exposed the concept of organized gang-stalking whereby targeted individuals are subjected to around-the-clock surveillance and harassment by rogue elements within law enforcement and the intelligence community. Considering the long, well-documented history of secretive intelligence programs such as MK-ULTRA, if U.S. congressmen are fair game for mind control, should anyone be surprised that tests are still being conducted on everyday citizens without their consent? Or, as Gunderson commented, “This makes the old Cointelpro program look like a Boy Scout jamboree.” Saddest of all, the public rarely sees a glimpse of these extreme tortures because, when the 20 victims approached Ms. Gutmann and her Bioethics Commission, every member of the media present that day stood up and immediately left. All of these so-called journalists showed they are more than willing to promote the Obama agenda by focusing on past horrors, while ignoring the people still being abused today. Source:American Free Press
Bioethics is the study of controversial ethics brought about by advances in biology and medicine. Bioethicists are concerned with the ethical questions that arise in the relationships among life sciences, biotechnology, medicine, politics, law, and philosophy (Wikepedia).
Study of Bioethical Issues May 18 - 19, 2011 - Targeted Individuals give their testimonies before the Presidential Commission about their involvement as involuntary mind control, weapons research, and no-touch torture victims.
2011 TI speaks at the Study of Bioethical Issues - February 28 - March 1, 2011- Targeted Individuals give their testimonies before the Presidential Commission about their involvement as involuntary mind control, weapons research, and no-touch torture victims.
Bioethical commission Mar2011..notified of deadly current day criminal human experiments