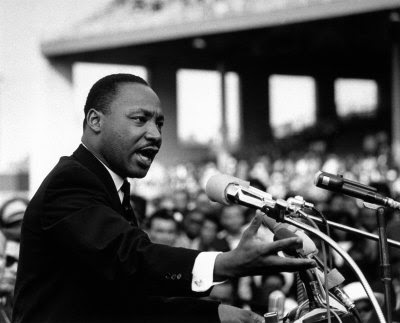 “Like anybody, I would like to live a long life. Longevity has its place. But I'm not concerned about that now. I just want to do God's will. And He's allowed me to go up to the mountain. And I've looked over. And I've seen the Promised Land. I may not get there with you. But I want you to know tonight, that we, as a people, will get to the promised land!”
I have a dream "...But there is something that I must say to my people, who stand on the warm threshold which leads into the palace of justice: In the process of gaining our rightful place, we must not be guilty of wrongful deeds. Let us not seek to satisfy our thirst for freedom by drinking from the cup of bitterness and hatred. We must forever conduct our struggle on the high plane of dignity and discipline. We must not allow our creative protest to degenerate into physical violence. Again and again, we must rise to the majestic heights of meeting physical force with soul force. The marvelous new militancy which has engulfed the Negro community must not lead us to a distrust of all white people, for many of our white brothers, as evidenced by their presence here today, have come to realize that their destiny is tied up with our destiny. And they have come to realize that their freedom is inextricably bound to our freedom. We cannot walk alone..." (Martin Luther King, Jr.'s "I Have a Dream").
View of Canada "Canada is not merely a neighbour to Negroes. Deep in our history of struggle for freedom Canada was the North Star. The Negro slave, denied education, de-humanized, imprisoned on cruel plantations, knew that far to the north a land existed where a fugitive slave, if he survived the horrors of the journey, could find freedom. The legendary underground railroad started in the south and ended in Canada. The freedom road links us together. Our spirituals, now so widely admired around the world, were often codes. We sang of 'heaven' that awaited us, and the slave masters listened in innocence, not realizing that we were not speaking of the hereafter. Heaven was the word for Canada and the Negro sang of the hope that his escape on the underground railroad would carry him there. One of our spirituals, 'Follow the Drinking Gourd', in its disguised lyrics contained directions for escape. The gourd was the big dipper, and the North Star to which its handle pointed gave the celestial map that directed the flight to the Canadian border." (Martin Luther King Jr.'s View of Canada).
Letter from a Birmingham Jail "...In any nonviolent campaign there are four basic steps: collection of the facts to determine whether injustices exist; negotiation; selfpurification; and direct action. We have gone through all these steps in Birmingham. There can be no gain saying the fact that racial injustice engulfs this community. Birmingham is probably the most thoroughly segregated city in the United States. Its ugly record of brutality is widely known. Negroes have experienced grossly unjust treatment in the courts. There have been more unsolved bombings of Negro homes and churches in Birmingham that in any other city in the nation. These are the hard, brutal facts of the case. On the basis of these conditions, Negro leaders sought to negotiate with the city fathers. But the latter consistently refused to engage in good-faith negotiation..." (Letter from a Birmingham Jail, Martin Luther King, Jr., 1963). 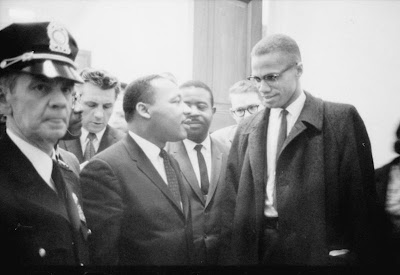 Martin Luther King, Jr. (January 15, 1929 – April 4, 1968) was an American clergyman, activist, and prominent leader in the African American civil rights movement. He is best known for being an iconic figure in the advancement of civil rights in the United States and around the world, using nonviolent methods following the teachings of Mahatma Gandhi. King is often presented as a heroic leader in the history of modern American liberalism. A Baptist minister, King became a civil rights activist early in his career. He led the 1955 Montgomery Bus Boycott and helped found the Southern Christian Leadership Conference in 1957, serving as its first president. King's efforts led to the 1963 March on Washington, where King delivered his "I Have a Dream" speech. There, he expanded American values to include the vision of a color blind society, and established his reputation as one of the greatest orators in American history (Wikepedia).
RELATED READING:
at 12:00 AM