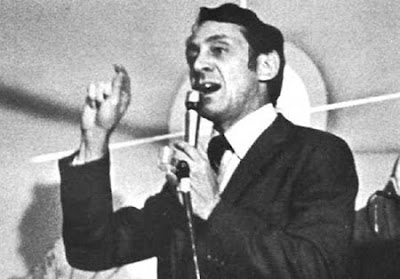 hope - "...I can't forget the looks on faces of people who've lost hope. Be they gay, be they seniors, be they blacks looking for an almost-impossilbe job, be they Latins trying to explain their problems and aspirations in a tongue that's foreign to them. I personally will never forget that people are more important than buildings. I use the word "I" because I'm proud. I stand here tonight in front of my gay sisters, brothers and friends because I'm proud of you. I think it's time that we have many legislators who are gay and proud of that fact and do not have to remain in the closet. I think that a gay person, up-front, will not walk away from a responsibility and be afraid of being tossed out of office. After Dade County, I walked among the angry and the frustrated night after night and I looked at their faces. And in San Francisco, three days before Gay Pride Day, a person was killed just because he was gay. And that night, I walked among the sad and the frustrated at City Hall in San Francisco and later that night as they lit candles on Castro Street and stood in silence, reaching out for some symbolic thing that would give them hope. These were strong people, whose faces I knew from the shop, the streets, meetings and people who I never saw before but I knew. They were strong, but even they needed hope..." (The Hope Speech : Harvey Milk).
mainstream - Harvey Milk never intended to enter the political arena until he moved to San Francisco in 1972. Prior to Milk's arrival, San Francisco's burgeoning homosexual population lacked a sense of community, and consequently its political empowerment had been stunted. note 1 The city's homosexual intelligentsia--weary of bearing the brutal brunt of police persecution and public vilification--had organized several "educational" societies--designed to enlighten public opinion on the subject of homosexuality in the early seventies. Since the idea of an openly homosexual running for office in a city which still classified homosexuality as "a crime against nature"--punishable by up to ten years in prison--seemed ludicrous to the homosexual intelligentsia, an integral component of these societies were their political action committees. The homosexual PACs quickly succeeded in drawing sympathetic "liberal friends" from the Democratic party to their convocations, who--in return for their endorsement, promised to shield open homosexuals from officially sanctioned victimization. For the first time in American history, "mainstream" political figures treated their homosexual constituents with dignity and respect, actively courting their support (The Forgotten Populist, Harvey Milk).
twinkie defense - On November 27, 1978, Milk and Mayor Moscone were shot to death in City Hall by Dan White (1946–1985), a former city supervisor who had quit the board to protest the passage of the city's gay rights law. In his trial for the killings, White's attorneys employed what came to be known as the Twinkie Defense. They claimed that the defendant had eaten so much junk food that his judgment had become impaired, or damaged, and that he had little control over his actions. White was convicted only of voluntary manslaughter, meaning he would receive the lightest sentence possible for a person who had admitted to intentionally killing someone. He served five years in prison before being paroled. On October 21, 1985, White committed suicide (Harvey Milk Biography). 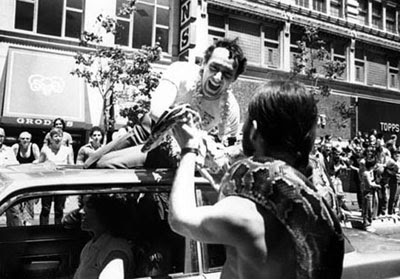 Harvey Bernard Milk (May 22, 1930 – November 27, 1978) was an American politician who became the first openly gay man to be elected to public office in California, when he won a seat on the San Francisco Board of Supervisors. Politics and gay activism were not his early interests; he was not open about his homosexuality and did not participate in civic matters until around the age of 40, after his experiences in the counterculture of the 1960s. Milk moved from New York City to settle in San Francisco in 1972 amid a migration of gay men to the Castro District. He took advantage of the growing political and economic power of the neighborhood to promote his interests, and ran unsuccessfully for political office three times. His theatrical campaigns earned him increasing popularity, and Milk won a seat as a city supervisor in 1977, part of the broader social changes the city was experiencing. Milk served 11 months in office and was responsible for passing a stringent gay rights ordinance for the city. On November 27, 1978, Milk and Mayor George Moscone were assassinated by Dan White, another city supervisor who had recently resigned but wanted his job back. Milk's election was made possible by and was a key component of a shift in San Francisco politics. The assassinations and the ensuing events were the result of continuing ideological conflicts in the city. Despite his short career in politics, Milk became an icon in San Francisco and "a martyr for gay rights", according to University of San Francisco professor Peter Novak. In 2002, Milk was called "the most famous and most significantly open LGBT official ever elected in the United States". Anne Kronenberg, his final campaign manager, wrote of him: "What set Harvey apart from you or me was that he was a visionary. He imagined a righteous world inside his head and then he set about to create it for real, for all of us." Milk was posthumously awarded the Presidential Medal of Freedom in 2009 (Wikepedia).