defending freedom - "...In the long history of the world, only a few generations have been granted the role of defending freedom in its hour of maximum danger. I do not shrink from this responsibility -- I welcome it. I do not believe that any of us would exchange places with any other people or any other generation. The energy, the faith, the devotion which we bring to this endeavor will light our country and all who serve it. And the glow from that fire can truly light the world. And so, my fellow Americans, ask not what your country can do for you; ask what you can do for your country. My fellow citizens of the world, ask not what America will do for you, but what together we can do for the freedom of man..." (John F. Kennedy Inaugural Address delivered 20 January 1961).
civil rights - Kennedy put political realism before any form of beliefs when he voted against Eisenhower’s 1957 Civil Rights Act. The route from bill to act nearly served to tear apart the Republicans and the Democrats were almost united to a politician in their opposition to the bill/act. Kennedy had aspirations to be the Democrats next presidential candidate in the 1960 election. If he was seen to be taking the party line and demonstrating strong leadership with regards to opposing the bill, this would do his chances no harm whatsoever. This proved to be the case and Kennedy lead the Democrats to victory over Richard Nixon in 1960. However, during the presidential campaign and after he was nominated for the Democrats, Kennedy made it clear in his speeches that he was a supporter of civil rights. Historians are divided as to why he was ‘suddenly’ converted. Some saw the opposition to the 1957 Act as understandable from a political point of view. Others have adopted a more cynical view which is that Kennedy recognised that he needed the ‘Black Vote’ if he was to beat Nixon. Hence why he said in his campaign speeches that discrimination stained America as it lead the west’s stance against the Soviet Union during the Cold War. He also said that a decent president could end unacceptable housing conditions by using federal power. His call of sympathy to Martin Luther King’s wife, Coretta, when King was in prison was well publicised by the Democrats (John Kennedy and Civil Rights).
conspiracy - The J.F.K.-conspiracy world is a funny place. Since the crime is already done, there’s no sense of moral urgency, as there is with other fanatical conspiracy worlds—it’s almost like crunching baseball statistics. The Kennedy assassination is an event that everybody agrees really happened, unlike the moon landing or Roswell; not even the crankiest crank argues that J.F.K. is hiding out in a Boca pad with Jimmy Hoffa and D. B. Cooper. But there’s no official version of the story, unless you count the Warren Report, which isn’t all that official, or the 1979 House Select Committee on Assassinations, which decided bullets were definitely involved. So there’s just an endless flow of unofficial versions, each one hinting that someday we’re all going to get a giant truth-gasmic payoff. When, Lord, when? That would be about 2017, according to Legacy of Secrecy: The Long Shadow of the JFK Assassination, the cinder-block-sized new volume from longtime Kennedy researcher Lamar Waldron and Air America radio host Thom Hartmann. They point out that the federal government is sitting on “well over one million CIA records” relating to the Kennedy assassination that have yet to be declassified, and will remain in the vault for another nine years. The book is 848 pages, and it’s as convoluted as its title, but for those of us who obsess over these things, it’s nowhere near long enough. The authors point the finger at mob bosses Carlos Marcello, Santo Trafficante, and Johnny Rosselli, raising many provocative questions about November 22, 1963—but the biggest question of all may be why, after 45 years, J.F.K. remains the world’s favorite murder mystery, kept alive by intrigue and sex and youth. Nothing has come along to replace him, or even come close (Legacy of Mystery). 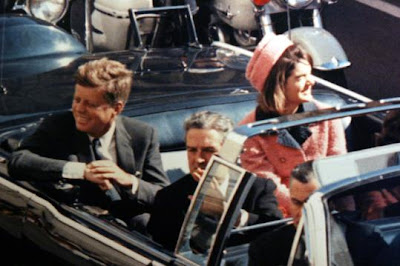 John Fitzgerald "Jack" Kennedy (May 29, 1917 – November 22, 1963), often referred to by his initials JFK, was the 35th President of the United States, serving from 1961 until his assassination in 1963. After military service as commander of the Motor Torpedo Boat PT-109 and Motor Torpedo Boat PT-59 during World War II in the South Pacific, Kennedy represented Massachusetts's 11th congressional district in the U.S. House of Representatives from 1947 to 1953 as a Democrat. Thereafter, he served in the U.S. Senate from 1953 until 1960. Kennedy defeated then Vice President and Republican candidate Richard Nixon in the 1960 U.S. presidential election. He was the youngest elected to the office, at the age of 43, the second-youngest President (after Theodore Roosevelt), and the first president to have been born in the 20th Century. Kennedy is the only Catholic and the first Irish American president, and is the only president to have won a Pulitzer Prize. Events during his presidency included the Bay of Pigs Invasion, the Cuban Missile Crisis, the building of the Berlin Wall, the Space Race, the African American Civil Rights Movement and early stages of the Vietnam War. Kennedy was assassinated on November 22, 1963, in Dallas, Texas. Lee Harvey Oswald was charged with the crime but was shot and killed two days later by Jack Ruby before any trial. The FBI, the Warren Commission, and the House Select Committee on Assassinations (HSCA) concluded that Oswald was the assassin, with the HSCA allowing for the probability of conspiracy based on disputed acoustic evidence. Today, Kennedy continues to rank highly in public opinion ratings of former U.S. presidents (Wikepedia).