genetic/racial factors - Edward and Claudia Kats, Russian immigrants who left when Russia was still part of the Soviet Union, relate how their son Jay was first implanted during a 1982 tonsillectomy operation at Stanford Medical Center. Edward attests that he himself was then implanted during an operation at Kaiser Hospital in 1991. They suspect that the initial reason for the interest on the part of the CIA was the family’s suspected but nonexistent connection to the KGB. Subsequent experimentation continued even after the agency realized there was no such connection, as son Jay was inducted into a full-on mind control operation. The article mentions the blond haired, blue-eyed appearance of Jay, and this makes me suspicious that perhaps the real reason for the interest on the part of the CIA has to due do with genetic/racial factors. The Katses describe how the implants affected Jay’s mood, mental acuity, attitudes towards other people...the works. His school performance deteriorated tremendously and he began to get in trouble with the law. They believe he and Edward are the target of transmissions which are intended to induce them to commit any of a wide range of preprogrammed actions--even crimes. Claudia noted in the article that threats, "bad thoughts" and negative, (self)-destructive concepts and attitudes or "feelings" are also transmitted. Edward Kats feels that large segments of the population, in particular racial minorities, are being subjected to the same kind of programming; for one reason, to instigate continual social/civil unrest and disturbances. The Katses and their legal representatives have filed formal and well documented complaints and reports with a host of law enforcement, judicial and other governmental agencies on many levels. Predictably, no serious interest has been shown nor any actions taken in response to the charges (Stanford Allegedly Involved in CIA Implant/Mind Control Experimentation).
behavior-modification - "...On March 11.1991, I Edward Kats went through the routing operation – nasal polyp removal – at Kaiser Hospital Redwood City CA under the supervision of chief ENT department Dr. Korol. During that operation, while being over seven hours under the general anesthesia I was forcefully subjected to become Human Guinea Pig involving viewing studies as well as behavior-modification program. To conduct an experiment, plantation of chips was placed in my sinuses as well as on the surface of my brain. Reality of this statement could be overview on available X-ray images. Consequently to end an experiment and remove implants would require removal parts of the brain as well as my eyes. The other way to make me became free is disconnect chipsets - so implanted system would stop its functionality. The Nazi “Doctors” who are stay behind this outrage crime daily executed remote electronic torture to persuade me to be agreeing for the devastating surgery. By transmitting sampled waves to what our brain in reality is recognizing as human body ID frequencies, “Scientist” torturing any part of my body extending such a torture for hours, day, after day, after day..." (Is CIA Doctores slowly murdering Kats family?). 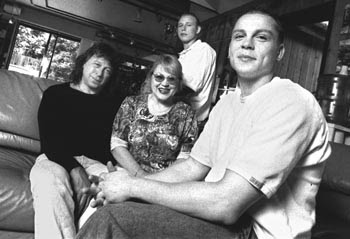 guinea pigs - Twenty year old Jay Kats of Palo Alto shifts a little awkwardly in his seat on the couch between his mother and father and considers the reporter's question: How does it feel having an electronic device implanted in his head that monitors his activities and interjects strange thoughts into his head? "Well, I don't really feel anything," he replies. "I don't get any messages or thoughts or things, like my father does. But I mean, I don't know what to compare it to. I'm supposed to have gotten this thing in my head when I was 4, so how do I know anything different?" At 20, Kats appears indistinguishable from thousands of other young men growing up in Silicon Valley. A classic blue-blond, he has an ad model's good looks and a skateboarder's lean, athletic body. A part-time student at Foothill College, he still lives at home with his Russian immigrant parents and an older brother. Jay Kats does not appear to be much different from the average valley kid, a Richie Cunningham for the '90s. Except that Richie Cunningham never had an electronic listening device inside of his brain. According to Kats' parents, doctors at Stanford Hospital secretly put the mysterious implant into their son's head during a 1982 tonsillectomy. They think that doctors at Kaiser Hospital in Redwood City gave Edward a similar implant nine years later. Edward and Klaudia Kats believe that the implants are the work of the Central Intelligence Agency, originally targeting the family because they were suspected of being Russian KGB agents. The spy charge disproven, the Kats family now thinks they are merely being used as "guinea pigs." They say they have been hounded for several years by intelligence agents, men who stop by their house and drop cryptic comments, or tail them in cars when they travel, or arrange auto accidents or other incidents in front of their house to keep them from attending meetings. "Have they called your editors yet?" Edward asks each time I talk to him. The harassment cost them their Palo Alto home, they say, and they are now forced to sleep on the floor of Jazz For Hair, the family's hairstyling business.
Both Edward and Klaudia Kats are multitalented; Edward studied music in the old Soviet Union and now works as a composer and an independent record producer. Klaudia was a professional singer; the two of them became hairstylists after they emigrated to America. They retain Old World manners and charm and still speak with accents that are heavily Eastern European. Edward explains his son's plight with great anguish. "The high school psychiatrist told us that something is wrong with Jay. He can't concentrate. He gets headaches. He can't sleep at night because the people at Stanford are always sending signals, waking him up. Once this device is implanted, it cannot be removed. My boy is doomed. They want to prepare him for prison and then murder him." Klaudia agrees. "We know that Jay was implanted because he started great changes as soon as he became a teenager," she says. "He started doing bad in school, all of a sudden. He started having big changes in his moods ... happy one time, and then just quickly change over to be angry without any reason whatsoever. He started getting into trouble with the law. They are able to push buttons any time they want to and get these children to commit crimes. They are doing it to blacks and to Latinos, too. You see it, don't you?" (Help! There's a chip in my body and I can't get it out!)