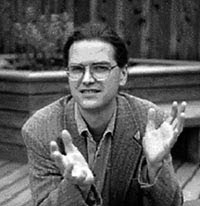 Dr. Nick Begich is the eldest son of the late United States Congressman from Alaska, Nick Begich Sr., and political activist Pegge Begich. He is well known in Alaska for his own political activities. He was twice elected President of both the Alaska Federation of Teachers and the Anchorage Council of Education. He has been pursuing independent research in the sciences and politics for most of his adult life. Begich received his doctorate in traditional medicine from The Open International University for Complementary Medicines in November 1994. He co-authored with Jeane Manning the book Angels Don't Play This HAARP; Advances in Tesla Technology. Begich has also authored Earth Rising – The Revolution: Toward a Thousand Years of Peace and and his latest book Earth Rising II– The Betrayal of Science, Society and the Soul both with the late James Roderick. He is also the editor of Earthpulse Flashpoints, a new-science book series. Begich has published articles in science, politics and education and is a well known lecturer, having presented throughout the United States and in nineteen countries. He has been featured as a guest on thousands of radio broadcasts reporting on his research activities including new technologies, health and earth science related issues (Dr. Nick Begich).
Begich found eleven other APTI Patents. They told how to make "Nuclear-sized Explosions without Radiation," Power-beaming systems, over-the-horizon radar, detection systems for missiles carrying nuclear warheads, electromagnetic pulses previously produced by thermonuclear weapons and other Star-Wars tricks. This cluster of patents underlay the HAARP weapon system. Related research by Begich and Manning uncovered bizarre schemes. For example, Air Force documents revealed that a system had been developed for manipulating and disturbing human mental processes through pulsed radio-frequency radiation (the stuff of HAARP) over large geographical areas. The most telling material about this technology came from writings of Zbigniew Brzezinski (former National Security Advisory to U.S. President Carter) and J.F. MacDonald (science advisor to U.S. President Johnson and a professor of Geophysics at UCLA), as they wrote about use of power-beaming transmitters for geophysical and environmental warfare. The documents showed how these effects might be caused, and the negative effects on human heath and thinking. The mental-disruption possibilities for HAARP are the most disturbing. More than 40 pages of the book, with dozens of footnotes, chronicle the work of Harvard professors, military planners and scientists as they plan and test this use of the electromagnetic technology. For example, one of the papers describing this use was from the International Red Cross in Geneva. It even gave the frequency ranges where these effects could occur -- the same ranges which HAARP is capable of broadcasting (The Military's Pandora's Box).
Dr. Nick Begich is well known for his work and research on HAARP, "Mind Effects" and more. He has widely reported in these areas as an expert for many publications, government organizations and private companies. He has been an expert witness for the European Parliament on these subjects and provides significant research contributions in this area. Also, through the Lay Institute on Technologies he organized a private meeting of top scientists in the area of mind effects in 2007. Begich has authored five books in seven languages on technology and the impacts of change. Heard on thousands of radio and television talk shows and documentaries, he is a frequent commentator on new technologies, energy, politics, education and the environment (Nick Begich Biography).
RELATED READING:
at 12:00 AM