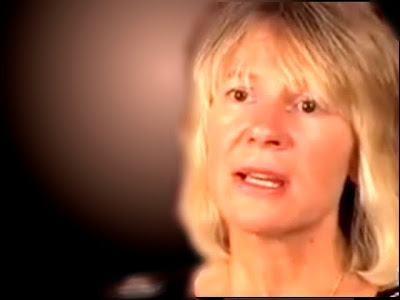 systematic physical and psychological torture - "My name is Cathleen (Cathy) Ann O'Brien, born 12/4/57 in Muskegon, Michigan. I have prepared this book for your review and edification concerning a little known tool that "our" United States Government is covertly, illegally, and un-constitutionally using to implement the New World Order (One World Government). This well documented tool is a sophisticated and advanced form of behavior modification (brainwashing) most commonly known as MIND CONTROL. My first hand knowledge of this TOP SECRET U.S. Government Psychological Warfare technique is drawn from my personal experience as a White House "Presidential Model" mind-control slave. Much of the information enclosed herein has been corroborated and validated through brave and courageous "clean" members of the law enforcement, scientific, and Intelligence communities familiar with this case. These individuals' efforts helped me to understand and corroborate what happened after a lifetime of systematic physical and psychological torture orchestrated to modify my behavior through totally controlling my mind. Some of these courageous individuals are employed by the very system that controlled me and live in fear of losing their jobs, their families, or their lives. They have gone as far as they dare towards publicly exposing this tool of engineers of the New World Order--to no avail. This book is a grassroots effort to solicit and enlist the public and private support of Human Rights advocates, the recognized, respected doors in America to expose this invisible personal and social menace. This can be done by well organized, cooperative citizens with a passion for justice, who have expressed interest in restoring our Constitution and taking back America. This copy you hold is for your edification and action..." (About The Authors: Cathy O'Brien). 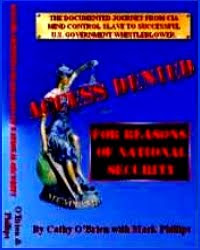 new world order - Here's a quote from her Trans Formation of America website, "In 1984, George Bush told Bill Clinton that when the American people become disillusioned with Republicans leading them into the New World Order, Arkansas Democrat Governor Bill Clinton would be maneuvered into place as President. Clinton was to be followed into office by Republican Bush, Jr. who was actively being programmed through MK Ultra mind control means in preparation for his role as President. When another illusion of change would be needed to appease the public, Hilary Clinton as a “female” Democrat was to be placed into the office of President thereby keeping the same family of dictators in full operation." but that didn't happen, and Obama became 'the angel who replaced the demon Bush' (with Hilary by his side). At some point in the late 60's early 70's MK ULTRA became MK DELTA and here are THREE MORE VICTIMS of this incest-family-based CIA mind control programme that THE USA GOVERNMENT WAS SPONSORING, and Clinton finally made a public apology for. I know, it sounds unbelievable, so if it's a load of bullshit, let's put these women on the witness stand and have the truth out: to the rest of you, yes, this is where edu-tainment films like The Bourne Identity come from (Cathy O'Brien - MK Ultra - CIA mind control programme). 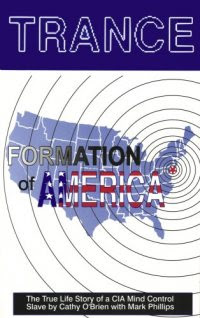 immense courage - "...people sometimes think I'm bullshitting them when I tell them about the MK Ultra Mind Control program, but as crazy as this stuff sounds, its all true. People have no idea of the depth of evil in the world. People are blind to what is going on all around them. People have no idea of the stuff the CIA does in their effort to force us into a world government. The CIA isn't part of our government, it is controlled by the Royal Institute of International Affairs and MI6 in the UK, which does the bidding of the Bilderbergers. It is a testimony to Cathy O'Brien's strength as a human being that she escaped the MK Ultra Program, and she has immense courage to come forward with her book. Her husband Mark was on the periphery of the MK Ultra Program, and through a serrendipitous chain of events, he learned the truth about what he was REALLY involved with, he learned of Cathy's plight, and risked his life to helped her escape to Alaska, where he was able to deprogram her with assistance from people inside the CIA who sympathized with O'Brien, and leaked him the info necessary to deprogram her..." (Double Cross to Hell: The CIA's MK Ultra Mind Control ).
Cathleen Ann O'Brien (born 4 December 1957, Muskegon, Michigan) is an American who claims to be a victim of Project MKULTRA, a program funded by the Central Intelligence Agency to research the use of drugs for intelligence purposes. O'Brien made these claims in Trance Formation of America (1995) and Access Denied: For Reasons of National Security (2004) which she co-authored with her husband Mark Phillips. O'Brien is one of many people publicly claiming to have survived 'CIA mind control' programs. There is no credible evidence for O'Brien's memories, which were retrieved through the use of hypnosis. The specific program which she claimed was responsible for her dissociative identity disorder, Project Monarch, is not mentioned in reviews of MKULTRA, its alleged parent program. Because most MKULTRA records were deliberately destroyed in 1973 by order of then CIA Director Richard Helms, it has been difficult, if not impossible, for investigators to gain a complete understanding of the more than 150 individually funded research sub-projects sponsored by MKULTRA and related CIA programs. She also claims recollection of child abuse - to her and her daughter - by international pedophile rings, drug barons and satanists, as part of a sex slave aspect to her 'trauma based mind control programming'. Individuals; from United States, Canadian, Mexican and Saudi Arabian government officials, to stars of the Country and Western music scene; are among those she accuses of these crimes. Investigations into the story produced no credible evidence and numerous inconsistencies (Wikepedia). 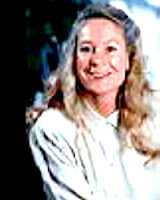