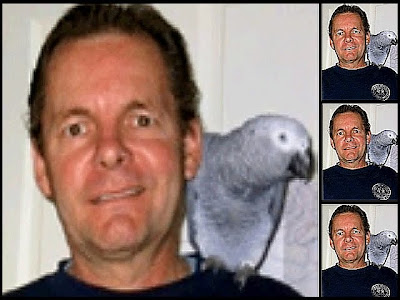 genuine investigation - "...heroic journalist at the level of reporter Victor Riesel (blinded by acid as a result of his exposing organized crime activity.) Greg is the first journalist to consistently and diligently conduct a genuine investigation of organized stalking, electronic harassment, and the crimes which made today's OS/EH possible, government mind control and dissent suppression programs like MKULTRA and COINTELPRO..." (Eleanor White's Hall of Heroes)
corruption and obstruction - "...the story sounds like something out of a mysterious spy novel, but in 21st century America truth really is stranger than fiction, especially when dealing with the likes of Gov. Bush, another master of Illuminati deception placed in a position of power. After a pain staking search for the truth every day for three long years, Esdale is still unable to pinpoint an exact motive for his father's murder, but claims he "heard something he shouldn't have" related to illegal drug running and/or was killed for his money, as the Bolivian undercover spy now owns his father's Sarasota house and property. "I hope no one else ever has to go through what my family has been put through for the last 3 years, and what we are having to endure as justice remains unserved," said Esdale recently on Greg Szymanski's radio show, the Investigative Journal. For copies of Esdale's broadcast go to the archives section at both www.rbnlive.com and www.gcnlive.com. "This is one of the worst cases of organized public corruption and obstruction of justice in U.S. history. The government is now allowing the murder of our own citizens." And Esdale appears to be making these statements after sifting through the cold, hard facts, as he has collected more than enough probable cause evidence that even a first year law student could easily convince a jury his father was killed..." (Jeb's Taliban Hard At Work In Florida)
strategically important military base - "...Essentially, no matter where he traveled or what leader he was hired to manipulate, the modus operandi was the same. Perkins would meet with a leader of a targeted country, encouraging him to accept a large loan for an inflated project that both the CIA and the leader knew the country could not afford. When the loan was accepted, usually through U.S. connections at The World Bank, the money would be transferred to a bank in the U.S. and then funneled back to U.S. companies through massive construction and engineering projects. Perkins' job was to provide inflated loan estimates, saddling the underdeveloped country with a massive debt, impossible to repay and leaving the country at the mercy of the U.S. to dictate repayment terms. These terms often times included the right to construct a strategically important military base, a favored U.N. vote in support of U.S. policy or cheap access and usage to a country’s natural resources. "Once the third world country was economically indebted to the U.S., the CIA would then have its hooks into manipulating the course and direction of the country’s political agenda," said Perkins. Perkins added that if this type of loan was arranged between private parties, it would be called extortion, but in the international arena it’s simply dismissed as economic development..." (US Foreign Policy:Conspiracy Bribery Murder & War)
Greg Szymanski, JD/JA, a satirist, a writer and a reporter. He’s been at it a long time, since the early 70′s, with little worldly success. A long the way he went to law school for what he terms “the fun of learning more nonsense in a world filled with a lot more.” He puts the JD behind his name but has recently added JA, standing for Jack Ass, in recognition of all the lies he has written about and believed in his life. Undaunted, he vows to continue reporting even more and bigger lies since deciding to tackle the religious world. Presently, Greg is enrolled for his Masters Degree in Theology at a Baptist Bible School, saying “if I make it through these next three years I am sure the Vatican will glorify me with Sainthood.” At present, Greg has decided not to attend for financial reason, saying ” it costs too much to become a saint these days.” The Investigative Journal Radio Show is produced by Greg and will be broadcasting on First Amendment Radio, starting March 21, 2011. The show previously ran for six years on other internet stations. During Greg’s tenure as a real live journalist working for the lying mainstream media, he worked in Rome for 6 years, experiencing Vatican intrigue first hand. “I wrote a lot of stories that never were published but prospered as a guitar-playing street singer,” recalls Greg. Greg has worked tirelessly for years trying to improve his street singing ability and in his spare time tries to expose what he terms as the Vatican-led New World Order. He also for eight months headed up a non profit group called Save Lake Atitlan Mission in the Guatemalan Highlands, bringing attention to poverty and pollution there. Although he raised a lot of awareness with his web site, he only collected $80 in donations after spending $4,500. He recently disbanded this endeavor for financial reasons. “I have lived on the principal of buying high and selling low,” quips Greg, who openly admits he should have attended the New World Order School of Business instead of these crazy law and Bible schools. He also admits not becoming a Master Mason has led to his financial demise. “I think these guys know something we don’t know,” added Greg. Join Greg every day in Marchand let’s find out what these Masons, Shriners and Satanists really know about how to survive in the world now known as the Vatican’s New World Order (arcticbeacon).
RELATED READING:
Official Web-site: Arcticbeacon
Eleanor White's Hall of Heroes
Greg Szymanski's articles
Seduce, Discredit, Separate, Intimidate, Incarcerate, and Assassinate
Julianne McKinney on Microwave Harassment & Mind Control Experimentation (Video)
at 12:00 AM