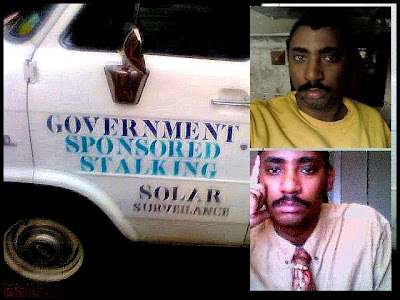 life threatening assaults - "The property damage involves the slashing of my right front tire. The slash is about an inch long, or about the size of a penny. Depending on how deep the slash is, the defected tire can lead to injury," he says. Driving nails into tires is also used to disable the target, cause tardiness for work, miss important appointments and drain finances when combined with other ways to ruin a target financially, workplace mobbing and blacklisting being most common. Repetition of such tactics is too often seen by the target, the target's family and associates as a series of "bad luck" or "coincidences". The attacks are professionally designed and created to appear as such. Usually, only after a long period of such oddities, do some targets realize they have been singled out for harassment and life threatening assaults. "An untold number of targets are unaware that they are victims of a CIA-Cointelpro-style abuse and/or non-consensual human research. They do not attribute their ongoing “bad luck”; mishaps; animal killings; or mysterious, untreatable, disabling “environmental” diseases to covert operatives using old Cointelpro tactics plus new weapons of war to terrorize, “neutralize”, and prevent resisting the treatment." (NC Targeted Individual tire slashed, common tactic)
electronic weapons - "As I was leaving ALDI’S supermarket, a Fayetteville North Carolina Police Officer Approached me. He told me he was informed by the manager of a Dollar General Store that I can not come back into this establishment. He told me if I should come back into this store, I would be arrested for trespassing. So I asked him if we can go to speak to the manager. He told me before he can do that, he had to check my license. Of course the purpose of this situation is so he can run a warrant check on me. This is how these crimes started. The over use of this method to profile black males cause me to make a complaint with the Fayetteville Police Dept. As a result, the next day, I realized I was placed in a highly advanced harassment program that involves stalkers and the use of electronic weapons. The program is 24/7 and involves the use of the GPS system to signal attacks to various parts of my body. Many of these attacks also involves the contamination of food, drink and products in the area were the target shops. Anyhow, after the officer returned, we went over to speak to the manager. The manager changed her story throughout the conversation, but she later confirmed what I was saying. Her name is Natisha. The officer’s name is confirmed on the video. I mentioned about the gang stalking and suddenly the officer had to leave. In short, the officer did say my attitude was not offensive and didn’t see why I wan’t being allowed in the store. But he has to follow orders." (Dollar General 532011)
paronoid thinking - "...I’m still not in a desire living situation to conduct the kind of business that will make me successful. So, until that becomes apparent, I must continue to strive for what would bring me to the same level I was in 2005. With that said, other than my undesirable living arraignments, I’m dealing with a system that does not want me to recover from my injuries. For instance, if you have not notice, the library system that you use is inflitrated with surveillance devices. These surveillance devices track people’s movements throughout the facilities. But also what people don’t know about these systems is that they track what websites you visit and it even goes as far asÂ correspond with governmental (and private) entities that might have put you on their list as an enemy combative. Please don’t write this off as paronoid thinking, but do you remember the “no fly list” that several people (known activists) were being placed on? Well this list has been distributored throughout the United States (some segments of the world) and sends out an alert when someone is picked up by these systems. There have been various specialized security forces hired to monitor these systems. There mission is to intiminate individuals who have been placed on this list and to make it hard for them to conduct business in these institutions. Face Recognition Technology is only one method that is used to indentified known “suspects. There are other modes used, which I will get into in future blogs..." (Happy New Year)
Chris J. Brunson who is using the handle name Qolspony is an activist and targeted individual from Fayetteville, North Carolina. In his web-site he described his activism: "Government Sponsored Stalking GSS is a NO nonsense website covering the issues that mean the most to Americans. Our constitution is in jeopardy of being replace and our basic rights will be lost forever. As a victim of 24/7 surveillance, electronic harassment, mind control, gang stalking and food/water contamination, I know it more than anyone else that if this trend continues, we will loose everything we take for granted today. This is why GSS is on the forefront in exposing government corruption, which is the crust of what is happening and why it is important that activism groups join forces. It might mean putting our difference aside just for the sake of future generations who have a right to live in a world free from satanic governments. If you believe in this message, join me in making this possible. You can reach me at anyone of my affiliates. Just understand that it will take more than talking to bring America back to its glory." (Governent Sponsored Stalking)
RELATED READING:
at 12:00 PM