On Feminism: I am going to do something very different, probably, than other people who have been asked the question. I am going to answer it as a Christian. I believe as a Christian that Jesus’ teachings were teachings of feminism. If you read the Gospel of Thomas, which of course is not included in the Bible, which is understandable given the group of men who decided what was going to be included and what wasn’t. It’s a series of, I think, 21 riddles that Christ said, or was supposed to have said, and if you can figure them out, then you enter the Kingdom of Heaven, which I believe means you become whole. And one of them says: when man becomes woman and woman becomes man, and outer becomes inner, and inner becomes outer, you enter the Kingdom of Heaven. And I think that what he said right there, and in many of his other preachings, was that humankind reaches its maximum development and most contains God when the two genders merge. And that means when women own their strengths, and men own their hearts. That to me is what feminism is - is when our full humanity is claimed. You can talk about equal rights, and you can talk about – but essentially feminism will come into wholeness when we achieve a social paradigm that allows men and women to become full human beings. Rather than women muting themselves and men hardening themselves, which I think it the root of all the problems – including war.

You know, having become an activist during the Vietnam War and wanting to really understand it, I read the Pentagon papers. And it was an amazing document because what it showed is that five administrations knew they couldn’t win in Vietnam, and yet they kept sending men there to die. And the big question for me over the years was why? And as I was writing my book and trying to figure this out, I read a book, “The Secret Papers” by Dan Ellsberg, and then I read Doris Kearns’ biography of Lyndon Johnson, and Lyndon Johnson put his finger on it. He said, ‘If I withdraw, they’ll call me an un-manly man.’ Think about how many Americans have died so our leaders could prove their manhood! This is so deep. And I don’t need to say that this culture of toxic masculinity is alive and well right now in this country and it’s tragic (Conversation with Jane Fonda). 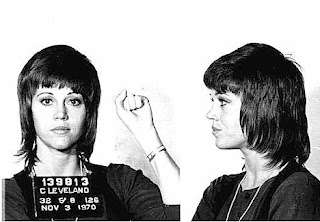 On Vietnam War: Jane Fonda - actress, political activist and partner of anti-war protester Tom Hayden - entered enemy territory for two weeks in November and emerged, in the eyes of many, as a traitor after posing for photographs at the seat of an anti-aircraft cannon and making radio broadcasts urging U.S. airmen to stop bombing North Vietnam. Fonda told servicemen stationed on aircraft carriers in the Gulf of Tonkin that the bombs they were loading into planeswere illegal and that using the bombs "makes one a war criminal." In 1988, Fonda went on ABC's "20-20" news program and apologized to Vietnam veterans and their families for her actions. "I was trying tohelp end the killing," Fonda said in an interview with Barbara Walters. "Butthere were times I was thoughtless and careless about it and I'm...very sorry that I hurt them." Asked about the continued bitterness over something that happened years ago - critics still refer to her as "Hanoi" Jane -- Fonda said, "Thereare still festering wounds and a lot of pain, and for some I've become a lightningrod." Fonda said she didn't realize at the time the effect posing with the anti-aircraft gun would have. "I know the power of images," she said inthe 1988 interview. "To have put myself in a situation like that was a thoughtlessand cruel thing to have done...I take fullresponsibility for it (Jane Fonda & TheVietnam War).
Jane Fonda (born Lady Jayne Seymour Fonda; December 21, 1937) is an American actress, writer, political activist, former fashion model, and fitness guru. She rose to fame in the 1960s with films such as Barbarella and Cat Ballou. She has won two Academy Awards and received several other movie awards and nominations during her 50+ years as an actress. After 15 years of retirement she returned to film in 2005 with Monster in Law, followed by Georgia Rule two years later. She also produced and starred in over 20 exercise videos released between 1982 and 1995, and once again in 2010. Fonda has been an activist for many political causes, one of the most notable and controversial of which was her opposition to the Vietnam War. She has also protested the Iraq War and violence against women. She describes herself as a liberal and a feminist. In 2005 Fonda worked alongside Robin Morgan and Gloria Steinem to co-found the Women's Media Center, an organization that works to amplify the voices of women in the media through advocacy, media and leadership training, and the creation of original content. Fonda currently serves on the board of the organization. Since 2001 Fonda has been a Christian. She published an autobiography in 2005 (Wikipedia).

Hanoi Jane - This cultural emphasis is what distinguishes Hanoi Jane as a truly unique book with a large vision. However, the reader may find that Lembcke's meditations on his subject walk a thin line between the insightful, the convoluted – and at least for this reviewer – at times the conspiratorial. He occasionally insinuates the experience of one POW as symbolic of all. Lembcke appears to suggest that front line female NVA/VC were imagined or exaggerated by combat GIs. Lembcke notes the collaboration of Vietnam war POWs with the enemy to gain favored treatment. This phenomenon is well know in Holocaust literature as identification with the aggressor and it is to Lembcke's credit that he acknowledges these aspects of the POW experience are contrary to popular belief (War, Sex and Fantasies of Betrayal). 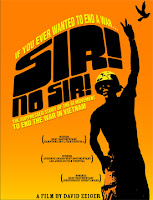 Sir! No Sir! - This is the story of one of the most vibrant and widespread upheavals of the 1960's–one that had profound impact on American society, yet has been virtually obliterated from the collective memory of that time.
RELATED READING:
at 12:00 AM