psychological trauma - "...Imagine a female college student who has been raped by a really popular male student. The male student wore a purple shirt on the night of their "date." When the victim files charges, a lot of students express their support for the popular male by wearing purple shirts. They position themselves wherever she goes, by wearing the purple shirt. As a victim of a psychological trauma, the symbolism is not lost on her, and each time a purple-shirted student blocks her way or sits in front of her or follow her into the restroom she is reminded of her humiliation and violation. If it continues, she will either drop out or psychologically collapse. This is the power that the symbol has over her..." (Hiding Multiple Stalker Harassment)
detox from radiation - "...It's sad but true that there are thousands of scientific references and medical studies out there on the fact that radiation and radioactivity can harm you, yet despite millions of dollars spent by the government to study radiation, virtually nothing is available about a detoxification diet or nutritional supplements you might use if you are exposed to radioactive contamination. Here's some of the information we do know from the only book in the world on the topic. Keep this information in the back of your mind as it may one day help save you or someone you know. Most people are aware taking potassium iodide (KI) or potassium iodate (KIO3) tablets will help block your thyroid gland from absorbing radioactive iodine should there ever be a dirty bomb explosion or nuclear power plant mishap such as the Three Mile Island incident. In 1999, another such accident happened in Tokaimura, Japan where several individuals died from radiation exposure in a fuel processing facility. What people don't recognize is that potassium iodide or iodate tablets only protect the thyroid gland and do not provide protection from any other radiation exposure, so taking them should not give you a false sense of security. It's important to detox your body after radioactive exposure! One question is, what do you do if KI or KIO3 tablets aren't available during an emergency? Interestingly enough, according to research by Ken Miller, health physicist at the Hershey Medical Center, he found that an adult could get a blocking dose of stable iodine by painting 8 ml of a 2 percent tincture of Iodine on the abdomen or forearm approximately 2 hours prior to I-131 contamination. Potassium iodine tablets are best, but if they're not available this is the next best thing..." (how to detox from radiation) 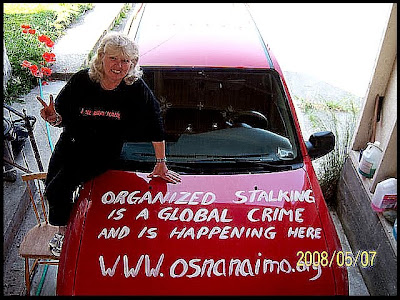 power to control - "...You have to take back control over your life and get out of the house and make yourself get a life other than the one that is imposed upon you. This is not an impossible task. I managed to do this (over time) and I am quite happy in my life… except for the EH which I can block if it gets unbearable. I took many steps to improve my outlook on life and I also began the process of forgiveness for all the wrong done to me in the past by people and or perps. This was the most difficult thing I had to do, but once I did let go of all the past shit and did not harbor any hate/anger/disappointment towards people, I saw a dramatic change in myself in particular my outlook on life and my health. I also had to come to a place in my life where I accepted my destiny as a target and carry on. In order to carry on and not be affected by the perps who mess with me in the community, I started to treat this like a game; a reality game where I am one of the characters and I have the power to affect the outcome of my day. I have the power to control every interaction. So I decided to do what I call "Fun with Perps". I am a bold person and this is advantageous, but I am also now a calm person and able to analyze a community interaction in a split second and return a perp behavior with a calm, funny, sarcastic or charismatic way that defused the situation and allowed me to have the power or control. My perps soon stopped trying to interact negatively with me in the community because they were starting to look the fool..." (Spot Light On: Debbie Newhook's Winning Philosophy)
global protest - "I feel our Victoria protest was a success. We had 5 people present at the protest: Keith Tickleback from Nelson BC, Consuelo Galomar from Vernon BC, David Smith from Grabriola, Heather Quinn from Victoria BC and me Debbie Newhook. We had one protester from Nanaimo, Doug (Jerry) Rose who could not make the protest as he reported he was feeling horrible the night before the protest and he did not think he would be able to make it. As soon as we arrived at the protest location we were greeted by a University of Victoria student who wanted an interview with us. David and I spent 30 mins with her speaking about this crime. We gave her hand out material which included FFCHS material along with a Jim Guest letter of support. In addition we suggest that she research James Walbert and directed her to an article in Wired Magazine about James Walbert. She was genuinely interested and shocked at many of the details about this crime. During the time David and I were being interviewed, the police arrived. Consuelo spoke to the friendly police officer and was told that the police got 2 telephone calls indicating that we were obstructing the sidewalk traffic. Upon his arrival he saw that we were only a small group and that we were not blocking the sidewalk traffic and asked that we continue to allow the flow of pedestrians and not to interfere with them. Keith was our camera person and did take still pics only of the event and did capture a picture of the police as he was talking to Consuelo. Later I was approached by woman who knew she was a target of this crime. She knew much about the goings on of the world and she expressed that she was a whistle blower. David and I could tell that she was genuine and she was fearful.I gave her my contact info. We had many other people briefly speak to us about this crime and did take hand out material.The area of the protest was a very busy location in Victoria and we all thought it was a success. After about 2.5 hours we had given away about 400 fliers and we were almost out of hand out material when the skies opened up and it began to rain very hard. We called it quits at that time and went back to Heathers house for a chat and a meal. In my opinion, I thought this was good activism day. David and I later talked about doing this in Nanaimo at a later date and discussed the date of Dec 10 as it was the UN day of Human Rights." (Reports From The Front - Oct. Global Protests) 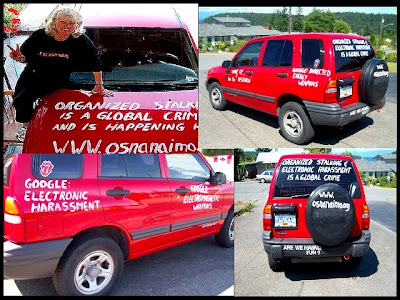 Debbie Newhook, activist, targeted individual from Nanaimo, BC. She studied Life Skills Coach Training at the Grant MacEwan University. On one of her radio guesting, Newhook described the start of her ordeal when in 1993 and working as a social worker, she took a 6 year old satanic ritual child abuse case from a Catholic social services in Edmonton, Alberta. She was warned by her superior not to take the case but she took it anyway and discovered the girl's family are entangled in an organization of ritualistic satanic mind control progrms. She will then learned later on that the government sponsored mind control programs that involves children at a young age also involved in population control and other similar research. And this started her targeting. Her perpetrator (stalkers) attempted to recruit her at one point but she figure out the criminal activities of this organization and refused. She also realized that this people used brain mapping technologies and other high tech devices and that the RCMP are involved and even use the services of this criminals. She reiterated that the police are complicit because they use the same technologies and they actuall "do this (stalking and harassment)." She believed that people are being implanted with tracking devices and micro chips and that other targets can't get government assistance to get rid of the implants. She pointed out the targets are branded as "National Security" as they don't get help from health practitioner, lawyer and politicians. Newhook learned to heal herself from directed energy weapon attacks after she several misdiagnosis from health officials who can't figure out what was wrong with her. Newhook believe that people are misinformed and not at all are "bad." She believe that technologies are being used to Canadians, attacking them without their knowledge. The people who are being attack will think of their situation as a series of "bad luck" but actually organized stalking and electronic harassment activities. She adviced anyone who are being attack: "do not isolate yourself." because this is one of the things the perpertrators want targets to do (Deb Newhook on Michael Herzog's "American Awakening" Show)