in a time of universal deceit

Film Review: Nineteen Eighty-Four (1984) The film is slow-moving and lacks suspense, instead relying on the famous story to naturally unfold. Many viewers might not want to wait that long, especially considering the depressing darkness of the subject matter. The book explores dismal, realistic, thought-provoking topics, most notable for an archetypal form of totalitarianism, the dangers of quelling freedom and for the shockingly morose conclusion. The film adapts these ideas without any real concern for entertainment value, although it’s remarkably faithful. It’s plodding and uninspired, lifelessly translating most of the novel’s content, but ignoring the opportunity for visual intensity, disturbing imagery, or even cheap scares, dread or anticipation (despite the themes of brainwashing and torture). Nineteen Eighty-Four is almost as powerful as the novel in the examination of the themes, but seems to exist for the sake of art, not entertainment (gonewiththetwins.com). 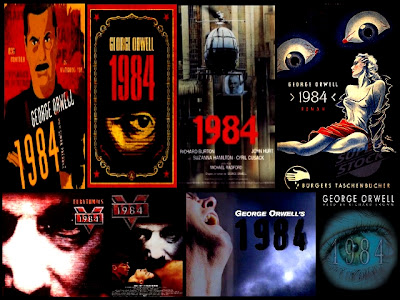 Winston Smith knows there is something wrong with the world. Surely it hasn’t always been tasteless food, gray, stringy clothing, a dispiriting job, and always the same fear and suspicion of everyone around you? But if life did used to be different, how does he know it was? What makes him question Big Brother, who is always watching, and the Party, who is always right? Why does he instinctually avoid the all-knowing tele-screen, and secretly abhor the Two Minute Hate that everyone else revels in? (Wikisummaries).

Book Review (Jun. 12, 1949): To say more is to tell the personal history of Winston Smith in what is probably his thirty-ninth year, and one is not disposed to rob the reader of a fresh experience of the terrific, long crescendo and the quick decrescendo that George Orwell has made of this struggle for survival and the final extinction of a personality. It is in the intimate history, of course, that he reveals his stature as a novelist, for it is here that the moral and the psychological values with which he is concerned are brought out of the realm of political prophecy into that of personalized drama. ''Nineteen Eighty-four,'' the most contemporary novel of this year and who knows of how many past and to come, is a great examination into and dramatization of Lord Acton's famous apothegm, ''Power tends to corrupt and absolute power corrupts absolutely'' (New York Times' Review of George Orwell's Nineteen Eighty Four). 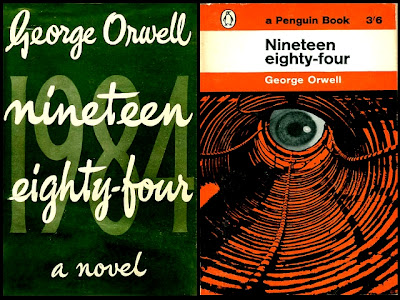 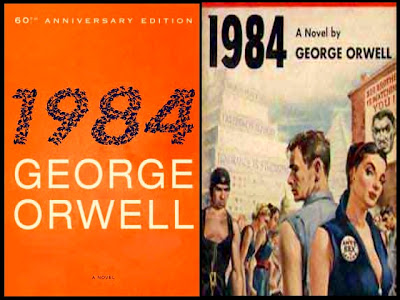 Book Review (Jun. 20, 1949): Absolutely Super. In Orwell's 1984, Britain is no longer Britain. It is merely part of the superstate Oceania (the British Isles and Atlantic Islands, North and South America, southern Africa, Australasia). From 1960 on, Oceania has been ceaselessly at war, sometimes as ally and sometimes as foe, with Eurasia or Eastasia, the only other existing powers. All three of these monolithic superstates have the atom bomb; none ever uses it because continuous, wasteful, indecisive warfare has become economically essential—"to use up the products of the machine without raising the general standard of living." Ideologically, Oceania, Eastasia and Eurasia have no quarrel; they are alike as three blackjacks. But war has turned out to be the simplest way of convincing the masses that their countries and their lives are in a state of emergency, which can only be met if all thought, as well as all government, is subject to absolute dictatorship. Hence the three great slogans that Oceania's wretched citizens read and hear every hour of their lives: WAR is PEACE: FREEDOM IS SLAVERY: IGNORANCE IS STRENGTH... Most novels about an imaginary world (e.g., Gulliver's Travels, Erewhon) have as their central character, or interpreter, a man who somehow strays out of the author's own times and finds himself in a world he never made. But Orwell, like Aldous Huxley in Brave New World, builds his nightmare of tomorrow on foundations that are firmly laid today. He needs no contemporary spokesman to explain and interpret — for the simple reason that any reader in 1949 can uneasily see his own shattered features in Winston Smith, can scent in the world of 1984 a stench that is already familiar (Books: Where the Rainbow Ends). 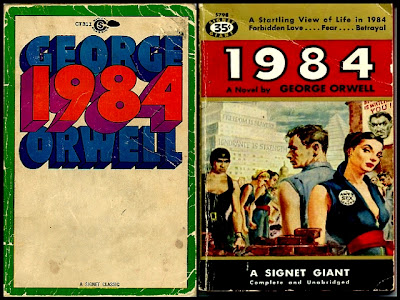 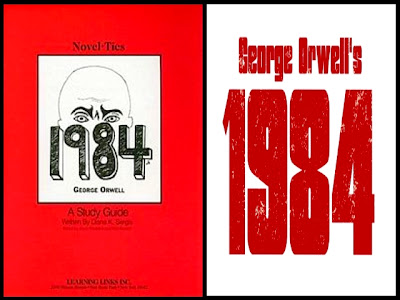 Book Review (Dec. 10, 2010): The politics of Poverty is an essential part in Big Brother's control of the people. By keeping the majority worker class in the hands of the Outer Party, the Inner party only needs to focus on controlling the desires and thoughts of a small portion of the population, which in return gleefully subjugates the rest. Perhaps then, the reason Orwell has achieved such great and coveted success is that like Winston himself, his methods are quite unorthodox. It quite easy to create a such a setting and warning by requiring the reader to suspend belief, its another to explain to him every inch and detail of how this could happen, and in deed does happen, in his own very world. Going above and beyond the normal may have just been what crowned Orwell his desired status (Escapist Magazine: Nineteen Eighty-Four). 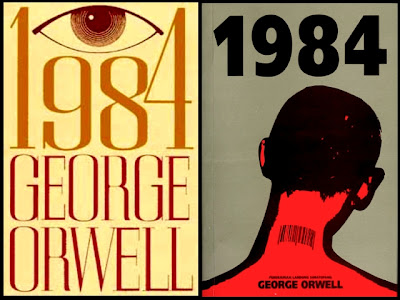 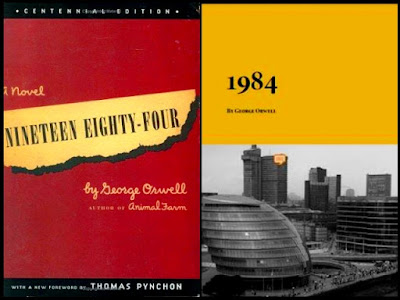 Book Review (Jun. 12, 2010): A similar “athleticism of mind” is required to digest the logic of a proposition offered by Obama in a televised interview just before his inauguration. Asked if he’d appoint a special prosecutor “to independently investigate the greatest crimes of the Bush administration, including torture and warrantless wiretapping,” the Harvard-trained former constitutional law professor answered that he had “a belief that we need to look forward as opposed to looking backwards”—a principle that would preclude ever prosecuting anyone for anything (but which, one may be sure, will be invoked only for crimes committed by the US state, or by the financial oligarchy whose interests that state represents). Early in the novel, Winston undertakes to commit a subversive act: he begins writing a personal diary. He wistfully addresses it “To the future or the past, to a time when thought is free.” Orwell has elsewhere been credited with “In a time of universal deceit, telling the truth is a revolutionary act.” Assaulted by the Newspeak of the US political class, we manifestly live in a time of universal deceit. We are all Winston Smith, and must look to revolutionary acts of telling the truth to light the way to a time when thought is free (A comment: Revisiting George Orwell’s Nineteen Eighty-Four in 2010). 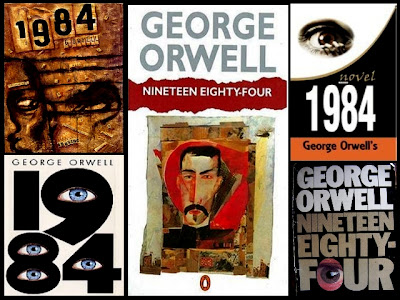 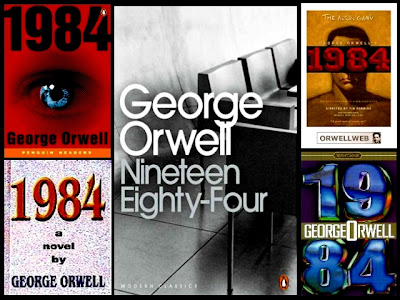 Nineteen Eighty-Four (sometimes written 1984) is a 1949 novel that reflects a dystopia by George Orwell about an oligarchical, collectivist society. Life in the Oceanian province of Airstrip One is a world of perpetual war, pervasive government surveillance, and incessant public mind control. The individual is always subordinated to the state, and it is in part this philosophy which allows the Party to manipulate and control humanity. In the Ministry of Truth, protagonist Winston Smith is a civil servant responsible for perpetuating the Party’s propaganda by revising historical records to render the Party omniscient and always correct, yet his meagre existence disillusions him to the point of seeking rebellion against Big Brother, eventually leading to his arrest, torture, and reconversion. As literary political fiction, Nineteen Eighty-Four is a classic novel of the social science fiction subgenre. Since its publication in 1949, many of its terms and concepts, such as Big Brother, doublethink, thoughtcrime, Newspeak, and Memory hole, have become contemporary vernacular. In addition, the novel popularized the adjective Orwellian, which refers to lies, surveillance, or manipulation of the past in the service of a totalitarian agenda. In 1998, the Modern Library ranked Nineteen Eighty-Four thirteenth on its list of the 100 best English-language novels of the 20th century (Wikipedia). 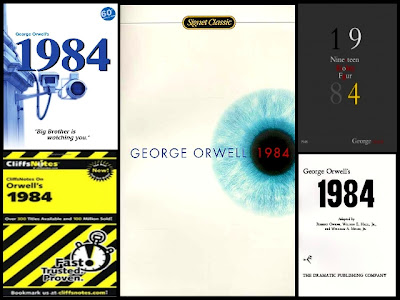 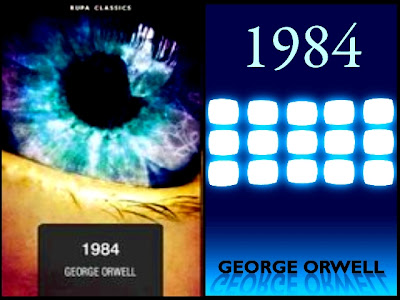 Eric Arthur Blair (25 June 1903 – 21 January 1950), better known by his pen name George Orwell, was an English author and journalist. His work is marked by keen intelligence and wit, a profound awareness of social injustice, an intense, revolutionary opposition to totalitarianism, a passion for clarity in language and a belief in democratic socialism. Considered perhaps the twentieth century’s best chronicler of English culture, Orwell wrote fiction, polemical journalism, literary criticism and poetry. He is best known for the dystopian novel Nineteen Eighty-Four (published in 1949) and the satirical novella Animal Farm (1945). They have together sold more copies than any two books by any other twentieth-century author. His Homage to Catalonia (1938), an account of his experiences as a volunteer on the Republican side during the Spanish Civil War, together with his numerous essays on politics, literature, language and culture, are widely acclaimed. Orwell’s influence on contemporary culture, popular and political, continues. Several of his neologisms, along with the term Orwellian, now a byword for any draconian or manipulative social phenomenon or concept inimical to a free society, have entered the vernacular (Wikipedia).

Ge0rge 0rwell’s You Tube Channel: George Orwell – A Life in Pictures “Somebody had a huge amount of fun making George Orwell: A Life in Pictures (BBC Two, Sunday) — the producer-director Chris Durlacher to be precise. In my college teaching days, we would get our media students to try to mimic the photographic or film styles of the past. They were useful and usually popular exercises. This biography turned out to be the Media Studies exercise to end them all. The narrator Barbara Flynn explained that there are no moving images of George Orwell nor surviving recordings of his voice. Given that we have wax cylinders of Tennyson croaking his way through The Charge of the Light Brigade, this is disappointing.”