Bloger's Note:
This essay is very relevant for targeted individuals not only the ones residing in America but also in Canada. 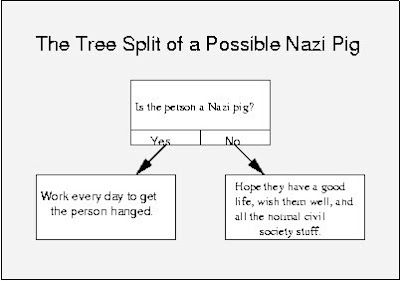 
If it's not useful or enjoyable or necessary, it's a worthless thought.
Zap it out of existence with IFT and think something else.
Truly internal, self-mind control is a good thing;
external nonconsensual mind control is Mengele-like torture.
No nens follow from nonconsensual externals,
except perhaps one to put it in the trash can
or a few to analyze it for evidence, nature and source.
But think anything you want. I curse the pigshit Nazis sometimes.
Focus your anger.
Ah, how sad it is, Auschwitz in the springtime...
One springtime
after another
--

You will feel stronger some days, fatigued others

If this essay helps you, read it again when you need a reminder
The Nazi harassment never reflects on you